What will city planners, civil society, and the private sector be focused on in 2040?

A lot could change between now and then. But absent a world-changing event or discovery, we have a pretty good idea how the challenges of 21st century cities might line up.

From preparing for climate change to expanding affordable housing options, the agenda will be brimming. Here are some predictions for the major tasks cities will be undertaking.

Compared to today, projected impacts of warming will wreak havoc on human settlement more regularly and intensely, whether sea level rise, storm surge, extreme weather, heat waves, drought, wildfire, or mudslides. Adaptation and resilience measures will be in full swing, and the most problematic coastal areas will be returned to their natural state. Meanwhile, cities will continue their role as leaders in mitigation: converting to renewable power sources, making all new construction zero-carbon and retrofitting older buildings, and reaping the low-emission benefits of walkable, compact, transit-served urbanism. The importance of land use and sustainable policies for land will be ever more apparent. Climate will be the central occupation of political leaders, planners, and the private sector. The extent to which the work is more like emergency triage will depend on what steps are taken in the next five years.

This common-sense solution deserves a heading all its own: designing and restoring natural systems to manage stormwater, diminish flooding, lower heat island effects, sequester carbon, revitalize public spaces, and improve public health. The running start by the Dutch on this front will look all the more prescient, including new ways of working with water (not just trying to keep the water out). Virtually every piece of transportation, energy, and park infrastructure will be built under this new ethos; a waterfront park will be designed to be flooded during a storm, for example, and returned to a dry state once water has retreated.  A 20th century visionary of ecological planning, Ian McHarg, will come to be regarded as the Jane Jacobs of resilience. Innovations in public finance, including land value capture (see below), will be required to pay for this extraordinary mobilization.

If it weren’t for climate change, this would be priority one – although intertwined efforts to build both resilient and inclusive communities will pay dividends. The basic ingredients should be in place: increasing supply through removing regulatory barriers and reforming zoning (including banning single-family-only zoning). It will be accepted practice for cities to increase affordability requirements every time an area is upzoned for greater height and density, since such government actions increase the value of land and property. We should see the “silver buckshot” approach in full swing – legalizing tiny houses and accessory dwelling units, and paving the way for more community land trusts, shared equity housing, manufactured homes, and converted single-room-occupancy hotels. Will it be enough? Probably not, which means continued experimentation with more major adjustments in the housing markets, such as the comprehensive land policy approach adopted by Singapore.

The gap between the rich and poor will continue to seem as intractable as when Henry George wrote Progress and Poverty more than a century ago. But changes in the urban growth policy framework, as well as some practical housekeeping steps in public finance, should result in some meaningful social change. Private landowners and developers will stop taking all the windfall from public investments and government actions that increase value. The property tax will finally get its due as the foundation of good municipal fiscal health, freed of caps and assessment limits like California’s Proposition 13. Assessments, valuations, and cadastres will improve thanks to advances in technology and methodology; other adjustments should become commonplace, such as circuit breakers, payments in lieu of taxes, and the more judicious use of tax incentives for business location and tax increment financing. Cities will also be working in earnest on unsexy but hugely important items like unspent federal grants and deferred maintenance.

In the next 20 years in the US, barring huge increases in immigration, we will be facing an inverted population pyramid—much like Japan is already facing today, where adult diapers outsell those for children. The aging population will require major revisions to existing and new housing stock, innovations in universal design, and wholesale changes in managed care. One prediction by Lincoln Institute president George W. “Mac” McCarthy, a veteran of promoting creative solutions to housing: affordable housing shortages for the poor and the need for home care for over-housed seniors will result in major increases in multi-generational households. A Cambridge start-up, Nesterly, has already recognized the trend, creating a matching service for over-housed elderly and young people needing affordable housing.

While all metropolitan regions go through some version of boom-and-bust cycles, the challenges of hot-market cities like London, San Francisco, and New York are different from those in Lagos and Mumbai. Policies similarly need to be customized for large and small post-industrial cities, whether Detroit or Youngstown. It’s a particular calibration, informed by the pace of neighborhood change almost block by block. Affordable smaller cities may find themselves suddenly very popular, and will face the singular challenge of embracing economic regeneration while minimizing gentrification and displacement. Meanwhile, as urban expansion continues apace in the developing world, there will be a paradigm shift in the approach to informal settlement, or slums – viewed less as a problem to be solved, but a functional attribute of urban growth to be both managed and prevented. Eviction and relocation should subside, in favor of working with informal communities where they are – fostering local control, and experimenting with new approaches such as community land trusts.

As Meeting of the Minds well knows, the integration of technology in all aspects of city life will manifest in many ways over the next two decades. Artificial intelligence, crowdsourcing, and data collection and analysis have gotten the most attention, but many of the most striking changes are set to occur in the physical realm – the layout of streets and sidewalks. Planners are hard at work right now trying to anticipate what’s going to be needed to accommodate delivery drones, trackless trams, and of course driverless cars and trucks, which will present their own congestion problems potentially, but also will free up all kinds of urban land no longer needed for traffic flow or parking. The transformation of the urban landscape will be more complicated than the transition from horses to cars, but no less doable.

Here’s one final prediction. For virtually everything – and especially preparing for climate change and accommodating shared autonomous mobility – the use of exploratory scenario planning will become ubiquitous. The approach, in which multiple possible future scenarios are considered, makes planning more nimble and flexible, and less set in stone. Because there’s one thing that’ll be certain for cities many years from now, and that’s uncertainty. 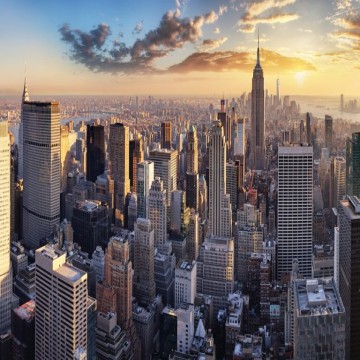