The world’s climate goals are not sufficient. They are also unlikely

Governments’ wholehearted support for the fossil-fuel industry is to blame 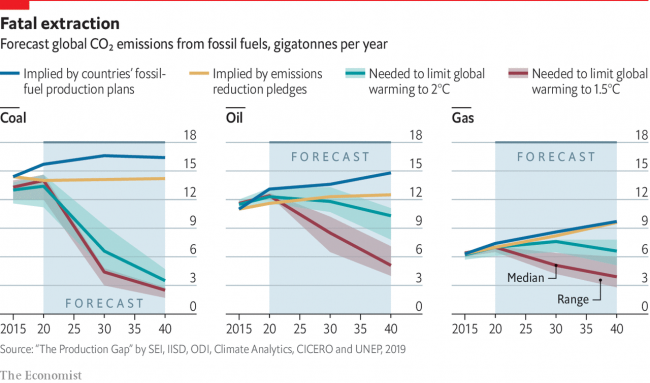 AT THE PARIS climate summit in 2015, 188 countries voluntarily committed themselves to plans to curb their greenhouse-gas emissions. Taken together, these pledges—known as “nationally determined contributions” or NDCs—fall well short of what is needed to achieve another part of the Paris agreement which aims to limit the rise in global temperatures to “well below” 2°C, compared with pre-industrial levels, by the end of the century.

However, a report published on November 20th by the United Nations Environment Programme and other research organisations finds that even these unambitious targets will probably be missed. The researchers arrive at this conclusion by combining the production plans of the eight biggest fossil-fuel-producing countries, which collectively cover 60% of global output, and applying conservative growth rates to the remainder of global production over the next 20 years.

The results make grim reading. According to these projections, global carbon emissions from fossil fuels will reach 41 gigatonnes by 2040. That is higher than the 36 gigatonnes implied by the NDCs. It is also well above the 19 gigatonnes needed to keep warming below 2°C and the 10 gigatonnes required for heating of just 1.5°C. Growth projections for the use of coal are especially disconcerting. By 2040, output of the world’s dirtiest fuel is expected to be 15% above the NDC-implied level and four times greater than the level needed to stop the planet from overheating.

The report lays much blame on governments’ generosity to fossil-fuel industries. An earlier study by the OECD and the International Energy Agency found that globally, government subsidies for production of fossil fuels totalled $24bn in 2017. Some put the figure higher still. China, which produces over 40% of the world's coal, encourages extraction through over a dozen handouts. America's federal government has 16 types of subsidy for digging up fossil fuels.

There are flickers of hope amid the gloom. A handful of countries have taken action to slow their production of hydrocarbons. Germany plans to cut its coal subsidies and New Zealand has banned new offshore oil and gas permits, for instance. But such policies are still too rare to offset developing countries’ growing demand for fossil fuels.