Opinion: Mapping out the future of humanitarian response

On Jan.12, 2010, one of the most devastating natural disasters of this century struck the island nation of Haiti. At the time, the few publicly available maps that existed were outdated or incomplete, missing the most basic details, especially for the 70 percent of Port-au-Prince’s population living in unplanned settlements. Not only did the humanitarian response community lack a common understanding of damaged roads and buildings, we also lacked basics such as a complete pre-earthquake map that could be used for navigation.

There was this crazy idea that if we got ahold of recent satellite images, a few dozen volunteers outside of Haiti could trace the roads and buildings into OpenStreetMap, the free and open map of the world that anyone can edit. A few days turned into a few weeks of work. More than 600 individual contributors used satellite imagery donated by NOAA, GeoEye, DigitalGlobe, CNES, Google, along with aerial photography from World Bank/RIT flights to hand-digitize the entire city of Port-au-Prince in astonishing detail. Maps were loaded onto handheld Garmin devices for navigation by first responders on the ground. Crisis mapping run by Ushahidi, which overlayed SMS calls for help onto OpenStreetMap, was credited with helping save lives.

Satellite imagery for mapping: Just as relevant in 2017

Flash forward to 2017. In September, I visited Uganda, now home to more than 1 million South Sudanese refugees living in more than a dozen sprawling rural settlements. The largest of which, called Bidibidi, is bigger than most Ugandan cities, changes on a daily basis, and is just as complex — home to shops, medical facilities, houses of worship, schools, and markets. The bad news is that the same data challenge that existed in 2010 Haiti persists today. Search for Bidibidi or any of the other refugee settlements in Uganda using one of the map apps on your phone, and it’s likely you’ll come to this conclusion: Many of the places least developed and most vulnerable to disaster, crisis or disease simply don’t appear, or look like a big patch of gray.

The positive side of the story is that this is changing, thanks not to one organization but to a global movement of people and organizations utilizing satellite technology to create better maps in the places they live and work. Here are three bits of good news helping to advance this movement.

1. A few hundred volunteers working with satellite imagery after Haiti has now grown into a global ecosystem.

From government bodies, United Nations agencies, Red Cross societies, and NGOs to 50,000 individual contributors in 40 countries, an interconnected global community is using remotely-sensed imagery from satellites and drones to derive value and “color in” the complex detail in seemingly blank areas of the map as part of the Missing Maps collaborative.

These organizations and individuals are creating map data in response to challenges relevant for them. Many times, these are also the world’s most difficult challenges. At the time of writing, Médecins Sans Frontières is sourcing volunteers to map Kutupalong, the world’s largest refugee camp housing hundreds of thousands of Rohingya refugees in Bangladesh. The American Red Cross is mapping communities in El Salvador to increase knowledge of disaster risks and increase preparedness.

2. Satellites are capturing better images with higher frequency than ever before.

The resolution of images is incredible at up to 0.3 meters. This means that one pixel of imagery on your laptop screen corresponds to an ultra-precise 30 cm by 30 cm square on the ground. This is enough to clearly make out an individual car, a refugee’s tented shelter, or the surface type of a road. The satellite company Planet’s mission includes imaging the entire earth every day.

3. Data is being collected at an astounding rate, faster than we have capacity to analyze as humans.

That’s where machine learning and artificial intelligence come into play. These technologies are helping us to do things like monitor for and detect possible changes, while humanitarian and development practitioners can validate this output, keep maps up to date, derive insight, and base program decisions on it.

Satellite technology and machine learning is cool. But humans working together with machines is even cooler.

Thinking that artificial intelligence or machine learning will replace the need for humans is flawed. Yes, we can be quite sure that some types of work may go away, or change, but the more interesting fact is that this change will enable us to focus human attention on where it’s needed most — things that only humans can do. For example, rather than scanning vast swathes of jungle for signs of human settlement, machine learning can help tell us where to look, such as the detailed population data sets extracted by Facebook from DigitalGlobe imagery. And in a disaster response scenario, machine learning could help human mappers focus in on high-priority areas that appear to have sustained the most damage.

There are some things that work well in tandem: While satellite imagery can identify the presence of a building, it is human intelligence on the ground that will investigate and determine what the building is.

Ten years ago, producers and consumers of satellite imagery were largely those in the academic and scientific communities. One of the most rapid changes relevant to the humanitarian and development sectors is the democratization of satellite and aerial imagery. Even small NGOs and community organizations active in disaster response have multiple free and open source software tools at their disposal. Now, anyone can collect aerial imagery, with drone prices under $1,000. Anyone can share imagery, through tools including OpenDroneMap and OpenAerialMap. Anyone can access and use that imagery to make decisions before, during, and after disaster. Those catalogues of imagery are broader and better than ever before. In 2017, DigitalGlobe made their entire DigitalGlobe Premium imagery product, often at 30 cm resolution and with global coverage, available for tracing into OpenStreetMap. The GEOSS portal enables search of open earth observation data from all over the world.

Open geospatial data is extraordinarily powerful. As data is generated on populated places, disaster damage, or key lifeline infrastructure by one program or actor, it can be leveraged or further enhanced by another organization working in the same area. By making satellite and drone imagery freely available through common catalogues, and using it to create maps in common databases such as OpenStreetMap, we improve the efficiency and effectiveness of the entire humanitarian and development system. With an expected humanitarian financing gap in the billions of dollars for 2018, improving efficiency, effectiveness, and working together across organizations is something we can all get behind.

See more from our Satellites for Sustainability partner UKSA on earth observation. 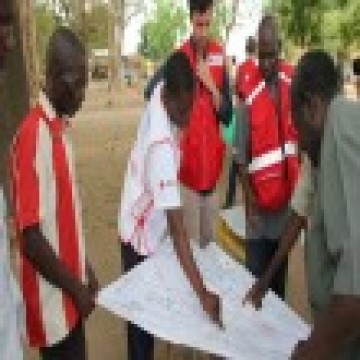