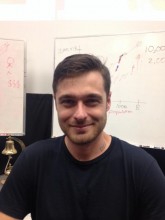 Arnaud is a graduate student in GIS, a researcher at the Center for Information Convergence and Strategy at SDSU, and a GIS consultant for GENI and the SIMCenter. Back in France, where he is originally from, Arnaud graduated in Geography with honors. He is now working on his Masters thesis, in which he investigates road infrastructures as an indicator of human and economic development at a world scale Aside from his academic activity, Arnaud became a volunteer at GENI with the aim to participate to one of the organization's mission: accelerating the transition to clean energy. In order to do so, he recently started to work on a new kind of renewable energy visualization tool, which will be introduced and showcased during the evening.