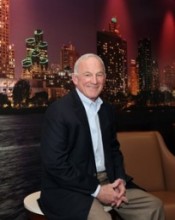 Jerry Sanders began his lifelong career in public service when he joined  the San Diego Police Department at the age of 22. In 1999, Sanders retired as Police Chief and became CEO of the United Way of San Diego. In 2005 he was elected as Mayor to San Diego. Under his control the city financial staff completed six years' worth of back logged audits, allowing the city to return to the public bond markets.This helped to fund the mayor's commitment to repair San Diego's long neglected water, sewer and transportation infrastructure. Sanders introduced Managed Competition to city government, which allows private companies to compete against city employees for the right to provide a variety of municipal services. In addition to his broad reform agenda, Sanders placed a high priority on economic growth and job creation during his term as Mayor. He has been a champion of the region's promising clean technology industry including solar energy, biofuels and other environmentally friendly products.  Sanders completed his second and final term as Mayor in December 2012. Jerry Sanders currently serves as the President and Chief Executive Officer of the San Diego Regional Chamber of Commerce.


Subject Matter Presentation
San Diego's economy: How sustainable and resilient are we?