LAST month, as I was driving down a backbreaking road between Goma, a provincial capital in the Democratic Republic of Congo, and Kibumba, a little market town about 20 miles away, I came upon the body of a Congolese soldier. He was on his back, half hidden in the bushes, his legs crumpled beneath him, his fly-covered face looking up at the sun.

The strangest thing was, four years ago, almost to the day, I saw a corpse of a Congolese soldier in that exact same spot. He had been killed and left to rot just as his comrade would be four years later, in the vain attempt to stop a rebel force from marching down the road from Kibumba to Goma. The circumstances were nearly identical: a group of Tutsi-led rebels, widely believed to be backed by Rwanda, eviscerating a feckless, alcoholic government army that didn't even bother to scoop up its dead.

Sadly, this is what I've come to expect from Congo: a doomed sense of déjà vu. I've crisscrossed this continent-size country from east to west, in puddle jumpers, jeeps and leaky canoes. I've sat down with the accidental president, Joseph Kabila, a former taxi driver who suddenly found himself in power at age 29 after his father was shot in the head. I've tracked down a warlord who lived on top of a mountain, in an old Belgian farmhouse that smelled like wet wool, and militia commanders who marched into battle as naked as the day they were born and slicked with oil - to protect themselves from bullets, of course. And each time I come back, no matter where I go, I meet a whole new set of thoroughly traumatized people.

Some are impossible to forget, like Anna Mburano, an 80-year-old woman who was gang-raped a few years ago and screamed out to the teenage assailants on top of her: "Grandsons! Get off me!"

Congo has become a never-ending nightmare, one of the bloodiest conflicts since World War II, with more than five million dead. It seems incomprehensible that the biggest country in sub-Saharan Africa and on paper one of the richest, teeming with copper, diamonds and gold, vast farmlands of spectacular fertility and enough hydropower to light up the continent, is now one of the poorest, most hopeless nations on earth. Unfortunately, there are no promising solutions within grasp, or even within sight.

I didn't always feel this way. During my first trip, in July 2006, Congo was brimming with optimism. It was about to hold its first truly democratic elections, and the streets of the capital, Kinshasa, were festooned with campaign banners and pulsating with liquid Lingala music that seemed to automatically sway people's hips as they waited in line to vote. There was this electricity in the air in a city that usually doesn't have much electricity. In poor, downtrodden countries accustomed to sordid rule, there is something incredibly empowering about the simple act of scratching an X next to the candidate of your choice and having a reasonable hope that your vote will be counted. That's how the Congolese felt.

But the euphoria didn't last - for me or the country. The election returned Mr. Kabila to power and nothing changed. I came back less than a year later and hired a dugout canoe to take me up the mighty Congo River, where I saw 100-foot-tall stalks of bamboo and spiders the size of baseballs. In the middle of the country, I came to appreciate how shambolic the state of Congo's infrastructure really is. Rusty barges that used to ply the river now lie on the riverbanks with weeds shooting up through their ribs. The national railway, which used to haul away all the coffee and cotton and bananas that this country produces, is all but shuttered.

I met a pair of soldiers who had chained a chimpanzee to a corroded railway tie, leaving the animal in a pile of its own feces, staring up at us with rheumy eyes as the soldiers howled with laughter. Congo is estimated to possess $24 trillion of mineral resources. Its soil is so productive that a trip through the countryside, past all the banana, orange, papaya, guava and mango trees virtually scraping the windshield, is like driving through a fruit salad. But without any functioning infrastructure, all this agricultural potential is moot. "How will you get anything to the market?" one local official asked me. "There's only so much you can carry on your head."

Later in 2007, I returned to write about a rape epidemic. In eastern Congo, which is savaged by dozens of armed groups, many of them scrambling for a piece of Congo's delicious mineral pie, it is as if the real battlefields are women's bodies.

Out here, hundreds of thousands of women have been systematically assaulted in recent years, leading the United Nations to call Congo "the rape capital of the world." Many of these rapes have been marked by a level of brutality that is shocking even by the twisted standards of a place rived by civil war and haunted by warlords and drugged-up child soldiers. What's the strategic purpose of putting an AK-47 assault rifle inside a woman and pulling the trigger? Or cutting out a woman's fetus and making her friends eat it?

THE government's response has been a shrug. Not long after writing that rape story I sat down with Mr. Kabila at a hillside villa. He drove himself to the interview and stepped out in jeans and a leather jacket. He didn't come across as arrogant, heartless or power hungry. No, he just seemed tired and overwhelmed. "We don't have time on our hands," he sighed.

We spoke shortly after the last round of violence in Goma, the capital of North Kivu Province and probably the most important city in eastern Congo. Back in 2008, just as now, it appeared that Rwanda was sending troops across the border. It's complicated and a bit unimaginable how one of Africa's smallest and poorest countries, Rwanda, could steer events inside giant Congo.

But for years Tutsi-led Rwanda has tried to carve out a zone of influence in eastern Congo, using ethnic Tutsi militias and Tutsi businessmen inside Congo to do its bidding. Rwanda has a very disciplined, patriotic army that punches above its weight - the Israel of Africa. It was Rwanda's invasion in 1996 that sent Congo into a tailspin it has yet to recover from.

For years, the United States and Rwanda's other Western friends turned a blind eye to this meddling. Again, like Israel, Rwanda has succeeded in leveraging the guilt that other countries feel for not intervening in its genocide in which almost a million people were killed when Hutu militias targeted Tutsis in 1994 - to blunt criticism of itself. But recently the United States and Britain have been presented with such a mountain of allegations about how Rwanda funneled arms into Congo and even directed the recent capture of Goma that they had no choice but to change tack. So the Western powers recently slashed aid to Rwanda because of Congo, sending a simple but forceful message: Get out.

But it's unfair to blame Rwanda for all of Congo's ills. Congo's core is so mushy and rotten from decades of titanic misrule that this country has become a dumping ground for armed groups from all over the place that exploit its porous borders and feed off its ambient chaos. In 2009, I traveled to Congo's northeast corner, where you can see beautiful aged mansions from the Belgian days beginning their slow, inexorable slide toward the jungle floor. This area, now totally cut off, without cellphone service or functioning roads, has become a refuge for the Lord's Resistance Army, a psychopathic rebel group originally from Uganda led by Joseph Kony. Nearly every year, its fighters club to death hundreds of people as they raid villages and kidnap children. Again, the Congolese Army, whose soldiers often don't get paid because of corruption, was nowhere to be found when the rebels stormed in.

There are few places in Congo today that are rebellion-free. Take the northwest corner, where I found myself in 2010 writing about a witch-doctor/insurgent leader who gave his troops a special emollient to rub on their chests and backs to make bullets bounce off them. "It's hard to kill these guys," one Congolese Army commander told me, with a completely straight face. "You have to shoot them from the side."

By the time elections rolled around again last year, the Congolese were fed up with Mr. Kabila. Just like Congo's last strongman, Mobutu Sese Seko, the dictator who ruled what was then Zaire for more than 30 years and robbed this country blind, Mr. Kabila and Co. have steadily siphoned government coffers to buy villas around the world and fancy cars while Congolese children with protruding bellybuttons rub their stomachs alongside the road as aid organizations drive past. But Mr. Kabila had no intention of leaving. Instead, election observers said, he rigged the vote. My most dominant memory from this period - and one of the most frightening things I've ever witnessed - was watching a mob of furious voters attack a poll worker, slugging him in the face until he toppled to the ground and then stomping on his rib cage until I'm sure he died.

Working in Africa, I can't tell you how many times I've heard,"It's all colonialism's fault." Clearly, that's often a dodge, but maybe in Congo, the legacy of misrule is too big to overcome. It began in the late 19th century when King Leopold II of Belgium virtually enslaved the population to extract as much ivory and rubber as possible. The next generation of colonists wasn't much better, whipping the Congolese with strips of hippo hide and making no effort to build up a professional class before they abruptly disappeared in 1960, turning over the keys to a country the size of Western Europe to a handful of college graduates, with rebellions breaking out almost from Day 1. And then came Mr. Mobutu, friend of America and utter disaster for the Congolese.

Congo could learn from Somalia, of all places. There, after two decades of civil war, the green shoots of a functioning government are finally sprouting, a result of grass-roots empowerment, a motivated business community and the steely resolve of African peacekeepers willing to absorb hundreds of casualties - which the United Nations mission in Congo has shown time and again that it is unwilling to do, despite having nearly 20,000 peacekeepers. Those peacekeepers sat riveted in their seats in their armored personnel carriers as the rebels marched into Goma on Nov. 20. Western powers pressured the rebels to leave, and they did less than two weeks later, but only after looting many government offices, cleaning out all the ammunition dumps and assassinating some enemies.

The rebels are now threatening to come back, and if they do, the government will surely throw in a few poor, underpaid souls to defend the town along that blood-soaked axis from Kibumba to Goma.

And we all know what we'll find in the bushes the day after.

An earlier version of this article described incorrectly one of the actions taken by Tutsi-led rebels, widely believed to be backed by Rwanda, who marched into the provincial capital of Goma on Nov. 20. While they looted many government offices, they did not clean out the central bank. 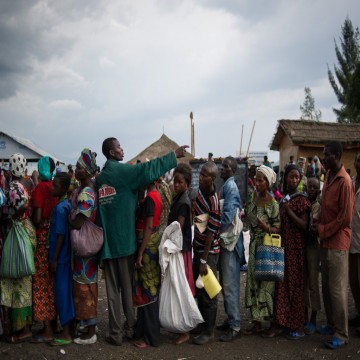