Population bomb: 9 billion march to WWIII -- Commentary: Can anyone halt this economic explosive?

SAN LUIS OBISPO, Calif. (MarketWatch) — Sshh. Don’t tell anyone. But “while you are reading these words, four people will have died from starvation. Most of them children.” Seventeen words. Four deaths. That statistic is from a cover of Paul Ehrlich’s 1968 provocative “Population Bomb.”

By the time you finish this column, another five hundred will die. By starvation. Mostly kids. Dead.

But global population will just keep growing, growing, growing. Why? The math is simple: Today there are more than two births for every death worldwide. One death. Two new babies.

Bomb? Tick-tick-ticking? Or economic bubble? Population growth is a basic assumption hard-wired in traditional economic theory. Unquestioned. Yes, population is our core economic problem. Not a military problem. But the bigger this economic bubble grows, the more we all sink into denial, the closer the point of no return where bubble becomes bomb, where war is the only alternative.

Yes, folks, ultimately population growth is an economic nuclear bomb, tick-tick-ticking a silent countdown to global disaster. In denial, we march a self-destructive path to WWIII.

Worldwide population doubled to 3.5 billion between the Great Depression and the Great Society. One generation, from the ‘30s to the ‘60s when “The Population Bomb” was published. Since the ‘60s, we’ve doubled again. This year global population shot past seven billion. Two billion living in poverty, surviving on less than two dollars a day. We do live in a globalized economy. And the math is simple: One death, two births.

Warning: This economic bomb will not stop tick-ticking any time soon. Why? Scientific American said population is “the most overlooked and essential strategy for achieving long-term balance with the environment.” No wonder Bill McKibben, author of “The End of Nature,” warns: “Act now, we’re told, if we want to save the planet from a climate catastrophe. Trouble is, it might be too late. The science is settled, and the damage has already begun.”

We’re on suicide watch and yet population control, the world’s No. 1 economic issue in “off the table.” Why? Last year Mother Jones made it abundantly clear why. In “The Last Taboo,” columnist Julia Whitty asked: “What unites the Vatican, lefties, conservatives and scientists in a conspiracy of silence? Population.” That hot-button issue ignites so many powerful reactions. Politicians won’t touch this third rail.

Our denial is a massive “conspiracy of silence.” Yes, we’re all in this global self-destructive conspiracy. Families love making babies. Economists obsess about their population-growth assumption.

Stockholders demand earnings growth. Wall Street is insatiable. Corporate CEOs shoot for quarterly targets to get ever bigger bonuses. The global Super Rich see population growth as opportunities to increase their wealth, widening the wealth gap. We’re all in this rat race together, in a “conspiracy of silence.”

Population is the key economic power driving all economic issues

Yes, you can forget “Peak Oil.” Forget global warming. Forget debt, deficits, defaults. Forget commodities, scarce resource depletion. Forget all other economic, political, military problems. Yes, forget all of them. None of them matter … if our leaders fail to deal with the world’s out-of-control population bomb. Nothing else matters. Nothing.

Still, the silence is defining. We’re trapped in this deafening “conspiracy of silence.” Neutered. Blind to this suicidal path, incapable and unwilling to face the greatest single economic challenge in history. Won’t wake up till it’s too late.

Why? Deep in our hearts we see no acceptable universal solution. So we wait … until this economic bomb stops tick-tick-ticking. Explodes in our faces. Till the wake-up call, a total economic collapse. Till then, the silence is deafening. We stay in denial. Waiting.

The United Nations predicts there will be nine billion or more humans on Earth by 2050. And while demographers want us to believe total population will level off, they’re just guessing. Depending on an unpredictable range of mathematical scenarios, maybe our planet could top 15 billion by 2100, all demanding a better lifestyle, all demanding more natural resources, more commodities, starting revolutions to achieve their economic goals. 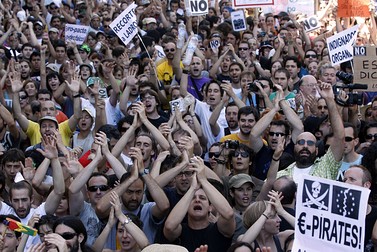 ReutersDemonstrators shout slogans as they crowd Madrid's Neptuno plaza near Spanish parliament in Madrid last week.Tens of thousands of Spaniards abandoned their customary Sunday quiet day with families and friends to march against the so-called "Euro Pact" and the handling of the economic crisis.

But the economic problem isn’t just the simple math of adding more bodies. “What really counts,” says Jared Diamond in “Collapse: How Societies Choose to Fail or Succeed,” “is not the number of people alone, but their impact on the environment,” the “per-capita impact.” First World citizens “consume 32 times more resources such as fossil fuels, and put out 32 times more waste, than do the inhabitants of the Third World.”

So the race to 2050 rages on: “Low impact people are becoming high-impact people” demanding “First World living standards.” But unfortunately, if all nations in the world consumed resources at the same rate as Americans, we’d need six Earths just to survive. Today.

Worse, the competition’s growing and we’re outnumbered. While America grows from 300 million to a 400 million by 2050, the rest of the world explodes into a nine billion bubble, with over 1.4 billion each in China and India. The bomb keeps tick-ticking.

What a “conspiracy of silence.” Seems everybody’s on the “economic growth” bandwagon. And with population growth comes chaos, anger, war. Remember 2011: Unemployed college kids in the Arab Spring. Higher pay for China’s workers. Wisconsin unions revolt. Warning, by 2100 the science-fiction solutions of “Avatar” and “Wall*E” will be reexamined seriously, perhaps even the unthinkable in the “Boomsday” novel.

WWIII is no fiction. We’re in the buildup now. During the Bush era, Fortune analyzed a classified Pentagon report predicting that “climate could change radically and fast. That would be the mother of all national security issues.” Population unrest would then create “massive droughts, turning farmland into dust bowls and forests to ashes.” Soon “there is little doubt that something drastic is happening ... as the planet’s carrying capacity shrinks, an ancient pattern reemerges: the eruption of desperate all-out wars over food, water, and energy supplies” with “warfare defining human life.”

Forget “Peak Oil.” The real economic force behind “Peak Oil” is “Peak Population.” Fail to defuse the population bomb and experts on sites like LifeAftertheOilCrash.com make clear the inevitable consequences of our denial, silence and inaction: “Civilization as we know it is coming to an end soon. This is not the wacky proclamation of a doomsday cult … it is the scientific conclusion of the best paid, most widely respected geologists, physicists, bankers and investors in the world.”

We are at the tipping point: Failing to defuse the population bomb guarantees global economic collapse.

Throughout history, myopic leaders never act … till it’s too late

Will our leaders rise to the occasion? History says no. Diamond put all this in perspective in “Collapse”: “One of the disturbing facts of history is that so many civilizations collapse. Few people, however, least of all our politicians, realize that a primary cause of the collapse of those societies has been the destruction of the natural resources on which they depend. Fewer still appreciate that many of those civilizations share a sharp curve of decline. Indeed, a society’s demise may begin only a decade or two after it reaches its peak population, wealth and power.” Tick, tick, tick ….

So what is this one common flaw that drives nations to collapse worldwide and over the centuries? Diamond says leaders “focused only on issues likely to blow up in the next 90 days,” lacking the will “to make bold, courageous, anticipatory decisions.” Their short-term thinking, unfortunately, sets the stage for a rapid “sharp curve of decline.”

And given the myopic mind-set consuming American politicians today, it’s easy to see how the daily trench warfare of the 2012 presidential campaign is connected to the Pentagon’s prediction of WWIII, of “desperate all-out wars” dead ahead.

Unfortunately, that is the end game of our “conspiracy of silence,” our unwillingness to confront the inevitable. Our inaction means war will be the ultimate economic solution: For America, for capitalism, for civilization, for Planet Earth. The bomb just keeps tick-tick-ticking. Nothing can, nothing will, stop this tick-ticking population bomb. Nothing, except a global nuclear economic bomb.