Greenland's Melting: Heat Waves Are Changing the Landscape Before Their Eyes

The ice sheet is in the midst of one of its most extreme melts on record, with worrying consequences for Greenland's people and the planet.

When the ice is gone—when there's nothing left to melt—that's when a new kind of worry sets in.

In years past, when it rained near Greenlander Toennes Berthelsen's family camp, water would flood down as the mountain top ice melted, creating rivers where there usually are none.

Last week, when it rained there, there was no river at all.

"It was heavy raining, but we couldn't see any flood coming down," Berthelsen said. The ice cap at the top of the mountain was completely gone.

Greenland, home to the world's second-largest ice sheet, has faced a summer of extreme heat. It saw exceptionally high temperatures in July—and that was before a new heat wave arrived this week and pushed temperatures above freezing even at the research station at the very top of the Greenland Ice Sheet.

Now, the same heat dome that cooked Europe is forecast to raise temperatures in Greenland into the 70s Fahrenheit on parts of the coast, and the ice sheet is in the midst of one of its most extreme melts on record, said Xavier Fettweis, a climate researcher at the University of Liège. On July 30 and 31, more than half of the ice sheet had at least some melting at the surface, Denmark's research institutions reported on Polar Portal.

"The current melt rate is equivalent to what the model projects for 2070, using the most pessimistic model," Fettweis said. That melting has global implications—if Greenland's ice sheet were to melt entirely, it would result in about 20 feet of global sea level rise.

As the temperature climbs and the long days of summer expose the ice sheet to more sunlight, the ice and snow at the lower elevations are the first to go.

"You get meltwater rivers, meltwater ponds—basically lakes on the surface," said Ruth Mottram, a climate scientist at the Danish Meteorological Institute. As the ice melts, it gets darker due to dust and other sediment. That leads to more absorption of sunlight, and more melting.

"You get higher up and you get into the slush zone"—with slushy, soft snow and ice—"and there's lots of water running off," said Mottram. Finally, you get high enough and the snow seems more stable—usually.

"I just got some numbers, and basically every single weather station in Greenland has had a warmer than average July," she said. "It's been dry and warm for a really long time."

What Berthelsen saw at his family camp tracks with what's happening across Greenland, Mottram said.

"We know that quite a lot of the sea level rise contribution from Greenland has come from these small glaciers surrounding the ice sheet," she said. "Some of the smaller ice caps not connected to the main ice sheet are completely melted. There's no ice left."

Heading for a Tipping Point

This summer has seen extreme lows in ice across the Arctic—both on land and off.

Losses in Arctic sea ice in early July mirrored what happened in 2012, which was the last recorded record low, according to the National Snow and Ice Data Center. Glaciers in Switzerland lost about 800 million tons of snow and ice during heat waves in June and July, according to glaciologist Matthias Huss of ETH Zurich who leads Glacier Monitoring Switzerland. And in Greenland, the extreme melting in July appears to have been just a harbinger of things to come.

On Tuesday, more than half of the entire ice sheet surface was melting, said scientist Irina Overeem. She just returned from four weeks of fieldwork in Greenland, where she was measuring the volume of meltwater as it flows to the ocean. She's been doing that work since 2007. This year, as the river where her station sits surges, her research site is at risk of being washed away. A video she posted on Twitter shows rapids of melting water flowing just below a bedrock ledge.

"At peak melt every single year the river does look really wild," said Overeem, who is an associate professor at the University of Colorado Boulder. "It's just higher and wilder than usual."

Both Fettweis and Mottram said the extreme melt happening now is something that climate models have not done a good job accounting for.

"By mid to end of the century is when we should be seeing these melt levels—not right now," Mottram said. "[The models] are clearly not able to capture some of these important processes."

Those processes, which include the impact of clouds and fluctuation of atmospheric pressure in the North Atlantic Ocean, are complex, and will be hard to incorporate.

That means that researchers are fairly confident about some things—like the relationship between background climate and the ice sheet melt rate, which is driven by the weather—others are less well understood.

Berthelsen, who is the CEO of the Greenland Fishers and Hunters Association, is quick to point out that a few people there are benefitting from the heat, at least temporarily. "We are very happy that it's warmer," he said. "It's good for the Greenland fisheries. We see more cod, we see mackerel."

Worrying changes from a warming climate are easy to point to, though. The shrimp industry has been pushed a little further north as the species seeks colder waters, he said. Same thing for Greenland halibut. There's more seaweed than ever, too.

In the southern part of the country, where there are roughly 40 sheep herding families, the dry summer has made it hard to grow enough hay for the herds. They're having to import it from Iceland, which costs a lot of money.

When it comes to mankind's contributions to climate change, Berthelsen said the onus lies outside of Greenland to fix it.

"We, as human beings, can do something, but we are only 56,000 people living in Greenland," he said. "Our behavior cannot impact the globe so much. I think the key is more in the western countries." 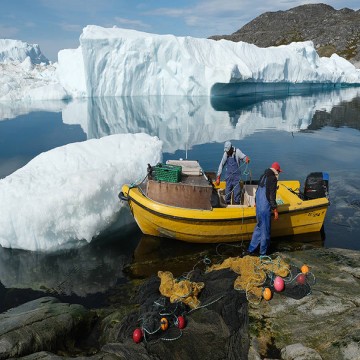