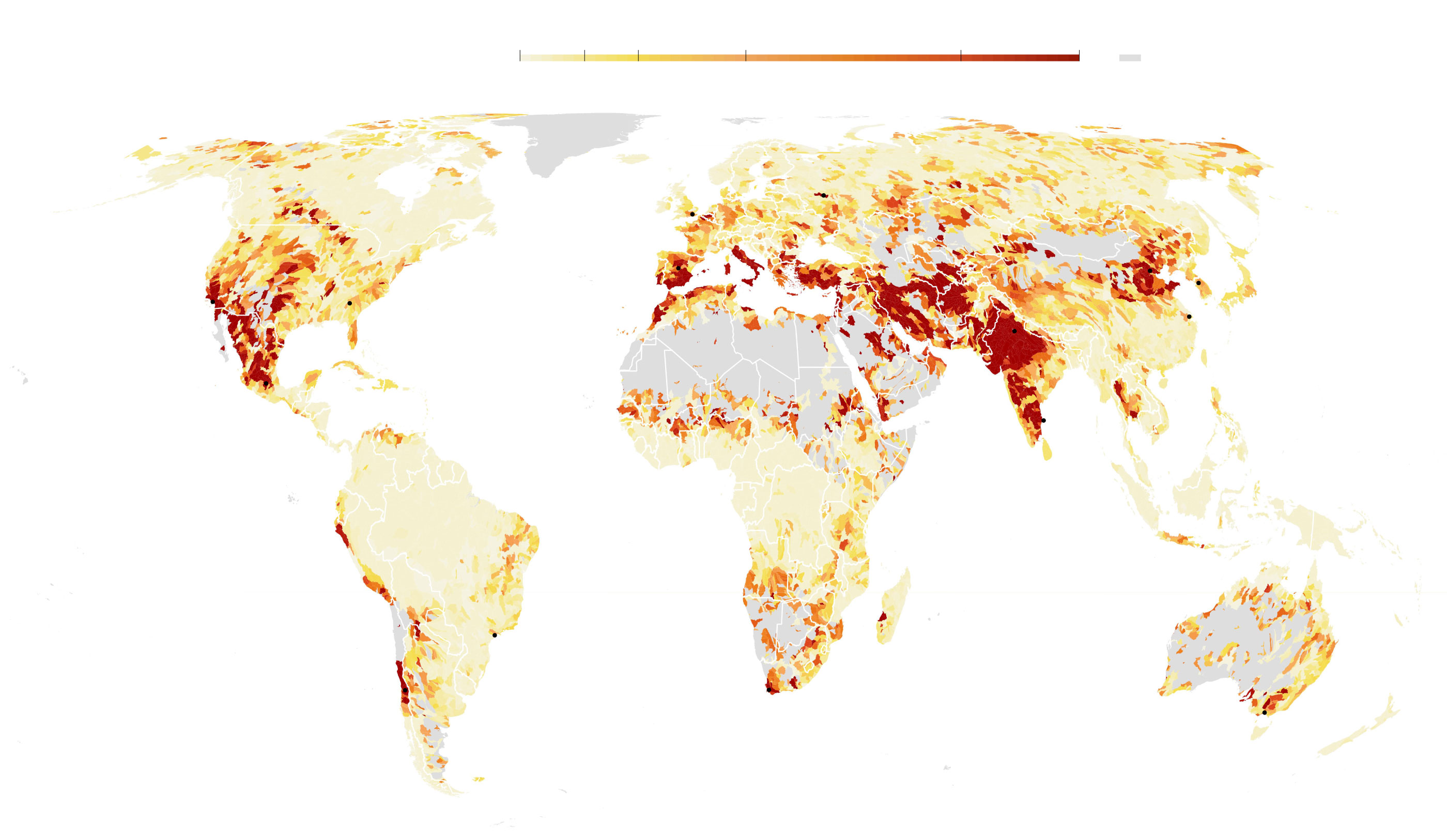 BANGALORE, India — Countries that are home to one-fourth of Earth’s population face an increasingly urgent risk: The prospect of running out of water.

From India to Iran to Botswana, 17 countries around the world are currently under extremely high water stress, meaning they are using almost all the water they have, according to new World Resources Institute data published Tuesday.

Many are arid countries to begin with; some are squandering what water they have. Several are relying too heavily on groundwater, which instead they should be replenishing and saving for times of drought.

In those countries are several big, thirsty cities that have faced acute shortages recently, including São Paulo, Brazil; Chennai, India; and Cape Town, which in 2018 narrowly beat what it called Day Zero — the day when all its dams would be dry.

More than a third of major urban areas with more than 3 million people are under high or extremely high water stress.

Note: Urban populations based on the U.N.’s World Urbanization Prospects 2018.

“We’re likely to see more of these Day Zeros in the future,” said Betsy Otto, who directs the global water program at the World Resources Institute. “The picture is alarming in many places around the world.”

Water-stressed places are sometimes cursed by two extremes. São Paulo was ravaged by floods a year after its taps nearly ran dry. Chennai suffered fatal floods four years ago, and now its reservoirs are almost empty.

Mexico’s capital, Mexico City, is drawing groundwater so fast that the city is literally sinking. Dhaka, Bangladesh, relies so heavily on its groundwater for both its residents and its water-guzzling garment factories that it now draws water from aquifers hundreds of feet deep. Chennai’s thirsty residents, accustomed to relying on groundwater for years, are now finding there’s none left. Across India and Pakistan, farmers are draining aquifers to grow water-intensive crops like cotton and rice. 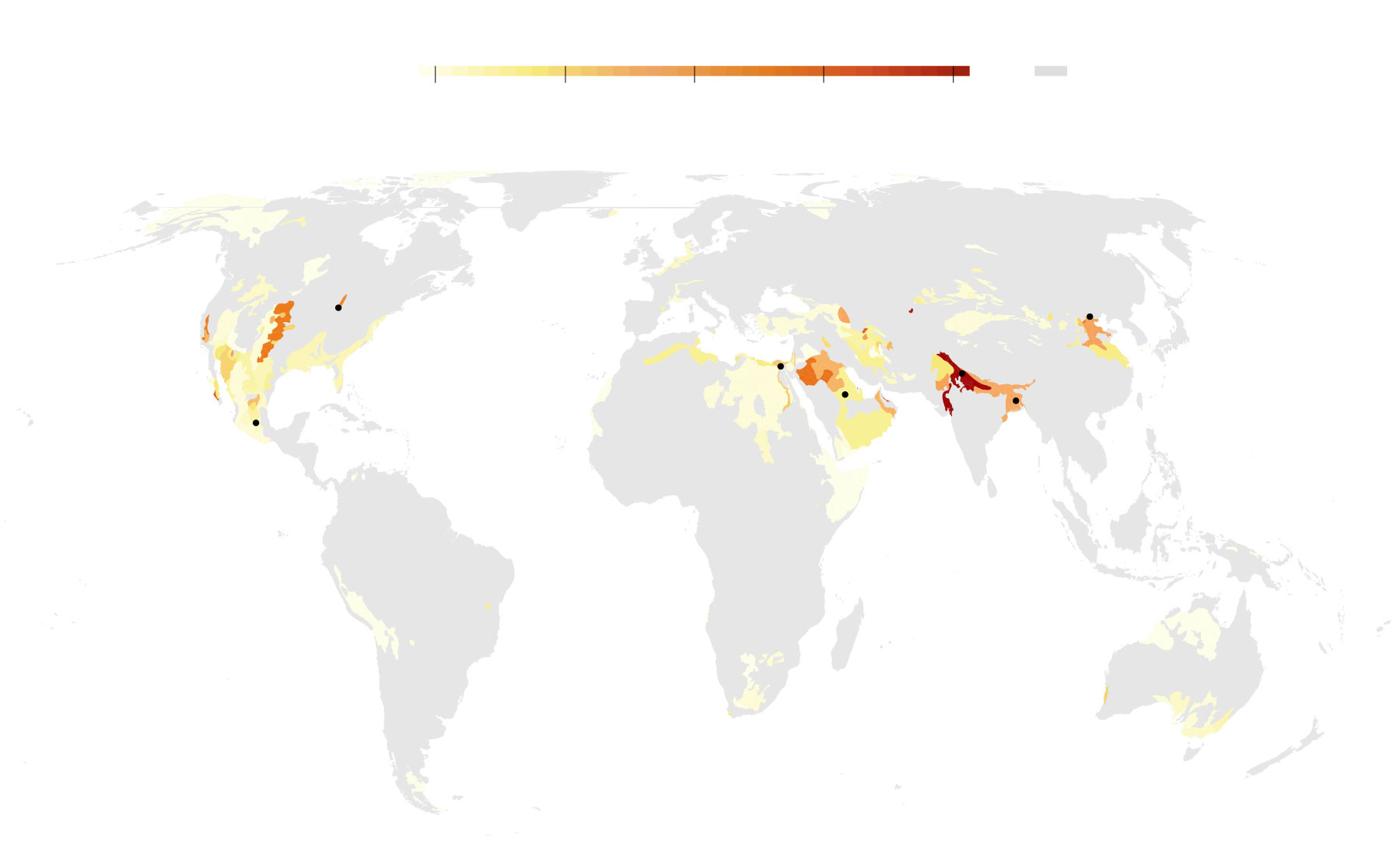 More stress in the forecast

Today, among cities with more than 3 million people, World Resources Institute researchers concluded that 33 of them, with a combined population of over 255 million, face extremely high water stress, with repercussions for public health and social unrest.

By 2030, the number of cities in the extremely high stress category is expected to rise to 45 and include nearly 470 million people.

How to fix the problem?

The stakes are high for water-stressed places. When a city or a country is using nearly all the water available, a bad drought can be catastrophic.

After a three-year drought, Cape Town in 2018 was forced to take extraordinary measures to ration what little it had left in its reservoirs. That acute crisis only magnified a chronic challenge. Cape Town’s 4 million residents are competing with farmers for limited water resources.

Likewise, Los Angeles. Its most recent drought ended this year. But its water supply isn’t keeping pace with its galloping demand and its penchant for private backyard swimming pools doesn’t help.

For Bangalore, a couple of years of paltry rains revealed how badly the city has managed its water. The many lakes that once dotted the city and its surrounding areas have either been built-over or filled with the city’s waste. They can no longer be the rainwater storage tanks they once were. And so the city must venture further and further away to draw water for its 8.4 million residents, and much of it is wasted along the way.

A lot can be done to improve water management, though.

First, city officials can plug leaks in the water distribution system. Wastewater can be recycled. Rain can be harvested and saved for lean times: lakes and wetlands can be cleaned up and old wells can be restored. And, farmers can switch from water-intensive crops, like rice, and instead grow less-thirsty crops like millet.

“Water is a local problem and it needs local solutions,” said Priyanka Jamwal, a fellow at the Ashoka Trust for Research in Ecology and the Environment in Bangalore. 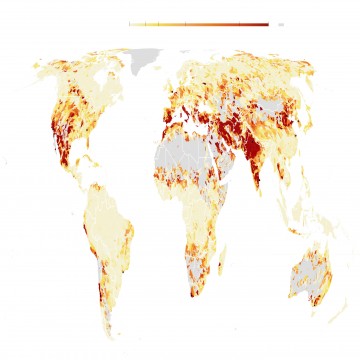